skip to main | skip to sidebar

This will be my last post on this site as I'm moving over to a new domaine at www.simonwoods.com - see you over there soon!
Posted by Simon at 2:48 pm 2 comments:

It's 2 in the morning and I'm still up. Why? Partly because I've had a great and stimulating day. It began with a talk from a Kiwi called Bob Franklyn that touched on many things, but that gave major prods about what it means to be community. Now whether we like it or not, we're all part of some community or other - geographical, work-related, hobby-related etc.

Then this evening, I've been talking with my sister Stella who lives in Melbourne, but is over to see what the Aussies call The Olds - and of course to be pressed into babysitting duty by my immediate clan. Stella's one of my favourite stimulators. At our worst, we bicker about irrelevancies, and at our best, we push each other onwards and upwards. And for someone like that, I want to pull out, not the trophy wines, but wines that move us (OK, a repetition) onwards and upwards.

She's gone to bed now, as has Jill, leaving me alone with a BBC4 concert of Leonard Cohen and the remains of our last stimulating bottle. It's from Corsica, the Domaine Saparale 2006 Corse Sartene. It's a wine that started of shy and wispy, but which over a couple of hours has emerged to show a gentle, smoky plum and pomegranate flavour, pepped up with rather more ethereal kirsch-like fragrances. Like Leonard, it's youth has passed, but it's all the better for having passed into confident maturity. Expect more about both Stella and stimulating wines in the next few posts - while she's over in Blighty, I'd be daft not to combine the two.
Posted by Simon at 2:06 am 5 comments: 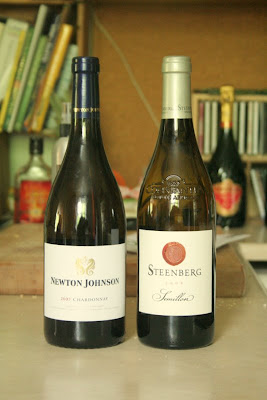 First of all thanks to Graeme Bell (tweet him here) for the link to the great pics of Manhattanhenge. Yes, Manhattanhenge, click here for more. Would be great to be able to get similar pics in the Pennines, but for two things - the sun never shines and the roads aren't straight.

Never mind, it's a sunny day inside, thanks to two splendid Cape whites. I seem to be having a Chardonnay sort of week, with Cumulus on Tuesday (look it up on twitter), a great Rully yesterday, and today, the Newton Johnson 2007 Chardonnay from Overberg (£10.79 Bibendum, Fresh & Wild (Wholefoods), SA Wines Online). It's a bit of a boisterous pup at the mo, but under the creamy, nutty exuberance and bouncy fruit lie a minerally streak and a backbone of zesty acidity. I'm shoving the cork back in (it was a total git to remove) and plonking it in the fridge not for tonight but for tomorrow - I expect it to provide even more pleasure.

I'm also doing the same with the 2008 Steenberg Semillon (£21.50 Armit). Never mind puppyhood, this little beast is yet to open its eyes. Steenberg has sometimes overdone the green peppery side of Semillon in the past, but here it's in proportion with the rest of the wine, as is the toasty oak, which flits rather than galumphs across the senses. Add in tangerine, custard and cream notes, and a refreshing herby character, and you have an intriguing and complex wine with a great future.
Posted by Simon at 3:03 pm 1 comment: 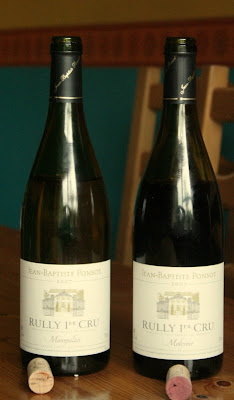 A name to watch. Jean-Baptiste Ponsot (nothing to do with the Ponsots of Morey St Denis) took the helm of the family estate in Rully six years ago, aged twenty, since when he’s been developing something of a loyal following. These two 2007’s show why. The Rully Blanc 1er Cru Montpalais is lush yet structured, with a creamy core, mealy intensity, tangy citrus and pineapple flavours with the oak (25% new) nicely in balance, and a zesty finish. The Rully Rouge 1er Cru Molesmes starts off with a wild bramble and prune edge, plus an ever-so-slightly rustic stalky spiciness (or spicy stalkiness? discuss...), and then turns richer and headier, with an exotic kirsch-like character coming to the fore. In this vintage, I side with the white, but both wines are really tasty, and beat the pants off all but a few similarly priced wines from the Côte d’Or. Both are £16.08 from Domaine Direct.
Posted by Simon at 1:52 pm 11 comments:

A selection from Artisan Wines

Andy Kerr has a full-time job in Chester but moonlights as on-line wine merchant Artisan Wines (www.artisanwines.co.uk). And while his range isn't the largest in the UK, it's one of the more intriguiing, focussing as it does on (currently) exclusively French wines, with a distinct organic and biodynamic slant. Some of the wines in the selection will divide opinion - the Savennières from Nicolas Joly for example. Others will raise eyebrows - if you though biodynamics was bonkers, then the cosmoculture of Domaine Viret qualifies as totally deranged**. Overall, it's an inspiring selection that deserves a much wider audience. Here are some notes on some wines I tried from the range in April (all are biodynamic bar the Marionnet):-

Domaine de la Coulée de Serrant Les Vieux Clos Savennières 2006 (£16)
The entry-level wine from Nicolas Joly's Domaine de la Coulée de Serrant is alarmingly concentrated, but has a pronounced savoury, cidery style that takes some coming to terms with. Some will love it, others (me included) will say it's oxidised - are you tasting terroir or winemaking style? (Joly says his wines need time once opened to show at their best - I gave it 48 hours, and it remained in a similarly awkward state)

Henry Marionnet Les Cépages Oubliées Gamay de Bouze 2006 (£9.50)
From a red-fleshed mutation of regular Gamay, this is like a rustic southern Burgundy, with spicy, smoky cherry and raspberry flesh, and rich, hearty finish

Montirius Gigondas Terres des Aînes 2005 (£13.50)
Bold and fleshy, with bumptious plum, herb and berry character and an earthy minerality comeing through strongly. Would be very good but for the level of brettanomyces, which takes the edge off the freshness of the fruit, and adds a barnyard-y character - which some will love.

** On the subject of Domaine Viret, here's a little something I wrote a while ago for Wine & Spirit International magazine (which merged with Harpers earlier this year)...

Never mind organic farming, on their estate in the commune of Saint Maurice sur Eygues in the southern Rhône, father and son Alain and Philippe Viret practice Cosmoculture. According to the Virets, it’s based ‘…on exchanges between cosmic and telluric [terrestrial] energies.’ Cosmoculture makes conventional biodynamic practices look positively mainstream. So for example you’ll find menhirs (the things that Obelix delivers, for Asterix fans) in the vineyards, placed so as to direct those telluric energy fields. The winery, sorry, ‘cathedral of wine’ is inspired by ancient Inca and Mayan cultures and aligned according to the position of the sun on Philippe’s birthday in 1973. The massive granite blocks used for construction are sized according to the Royal Cubit (~524 mm) and the shape of the cathedral conforms to the Golden Section. Add in mystic fountains, crystals, amphorae and more and you have one of the world’s weirdest wineries. But the wines are excellent, brimming with life and personality, and deserve serious attention. If you want to find out more about aspects of Cosmoculture such as Radionic Culture, Geobiology, Planetary Beacons and Water Memory, check out the Viret web site at www.domaine-viret.com. And if you want to try the wines, they’re imported by Artisan Wines (www.artisanwines.co.uk)
Posted by Simon at 11:09 am No comments:

The word on the street is "Toast"

At least that's the news according to Wine Peeps. Last week's word was Malolactic fermentation - OK, that's 2 words, but I didn't come up with this. But toast, yes, that most agreeable to snacks. I'm always suspicious of people who don't like toast (and sausages and chocolate). I mean, what's not to like? OK, most domestic toasters seem to have no setting between anaemic and frazzled, but after a few sorry attempts, we all get around this failure.

In wine, toast is one of those characters that I like finding in wines that aren't aged in highly-toasted oaked barrels or indeed in any sort of barrel (think Champagne, Riesling and Semillon) and don't like finding in wines that are (think bimbo Chardonnay and too many New World Shirazes). In the first instance, it's a sort of complexity that has emerged almost as if by magic; in the second, it's there as a bolt-on flavour. I'm fed up of winemakers saying they age their wines in toasted oak barrels to add complexity. What they mean is they use it to add flavour, which is quite a different thing. Is a steak made more complex by being smeared with ketchup? No.

Toast rant over, but the word toast has another meaning in the Woods' household, that originated with my in-laws. It went something like this.
F-I-L: Can you smell toast?
M-I-L: (looking at F-I-L in astonishment) T-O-A-S-T...

OK, she's not got the best hearing and maybe you had to be there, but it's become part of our vocabulary. Whenever someone has misheard something, and gone off on a completely wrong tangent, we say, 'This is turning into a toast conversation.' Now you know...
Posted by Simon at 3:26 pm No comments:

Just marking time before going out for what may be a troublesome evening with Robert Joseph and potentially Adrian Atkinson, ex-Oddbins buyer and now a man breathing life into the Pernod Ricard wine portfolio. But the day has been taken up with a delicious lunch at Chez Bruce (veal cheek to die for) accompanied by wines from Domaine Gayda surrounded by a tasting of wines represented by one of the UK's top wine PR companies, Westbury Communications.

Will get on to Gayda some time soon, but in the mean time, a brief appraisal of some of the Westbury wines. Or maybe more accurately an appraisal of the big boys they represent - Oddbins, Nicolas and Marks & Spencer. Perhaps it's not the most critically accurate means of assessing the wines of these three giants of the High Street, but it was perhaps telling that only M&S's Jo Ahearne turned up to try the wines. 'I just thought I'd come and say "hello" to everyone, and while I'm here, I'll have a swizz round the competition.' Yes, I checked that word "swizz" - that's what she said. And "swizz" she did, unlike anyone from Oddbins or Nicolas.

Maybe Jo's "swizz" was a negative (or a swindle, as any fule kno). Maybe not. But it's perhaps telling that the wines selected by her and her cohorts stood out from the competition. So if you're swizzing round M&S in the near future, here are some gems to seek out... 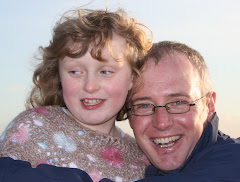 Another award-winner. This one's a narrative of how wine is made, with a hint of a French accent...

Other great sites to check out -